skip to main | skip to sidebar

Divided by a Common Tongue

I've been a bit lax in updated this one of my blogs. However, with my new toy I'm now able to get online easier and will be trying to update this blog at least twice a week for the foreseeable future whilst still maintaining my main blog.

Growing up in Bangor and being educated at Regent House in Newtownards when I moved here to Scotland I found my ear adapting incredibly easily to the natives. But that wasn't always the case.

When I first lest home to attend University I found myself in London and surrounded almost entirely by the English. My landlady in that first year spoke in rhyming slang and my housemates were from the midlands and Lancashire. So I was learning to cope with quite a few different sounds, words and ways of speaking.

However, one barrier remained in my way. My Norn Irs accent. Indeed in my first week at Kingston in one freshers week event on girl on finding where I came from and on having difficulty understanding what I was saying grabbed another newbie called Peter from Belfast and we were able to communicate. We eventually learnt to tone down the accent and indeed slow down to be understood. But in those first few weeks we grew frustrated in constantly having to repeat ourselves over and over.

As time went by and me and Peter were more understood my the others of course we did have one way to talk in private even in a crowded room. We'd just get faster and faster and more and more Northern Irish and watch the expressions around us go blank or people lose interest in what we had to say.

I however am also as natural mimic. I'm constantly having to hold myself back from copying other people, which seeing as most of my working life has been in people facing roles or at least communication has always been an issue. So I slowly managed to acquire the hotch potch of an accent often leaving London with an Irish accent only to land back home and be told off for my London accent. Someone on the one hour flight I apparently changed somewhere over Birmingham or somewhere. Indeed when I returned to live in Bangor, the town

So when it came to me working in call centre after many years of living elsewhere. I used to enjoy the Northern Irish callers basically because I could and would go back more towards my natural speaking voice. I'd even learnt by then how to adjust straight back into my more tamed professional self.

So NIPPLEs abroad can tend to have to repeat themselves. But people love the accent so mellow it never lose it entirely. And always, always maintain the way you say fil-um.
Posted by Stephen Glenn at 11:40 43 comments: 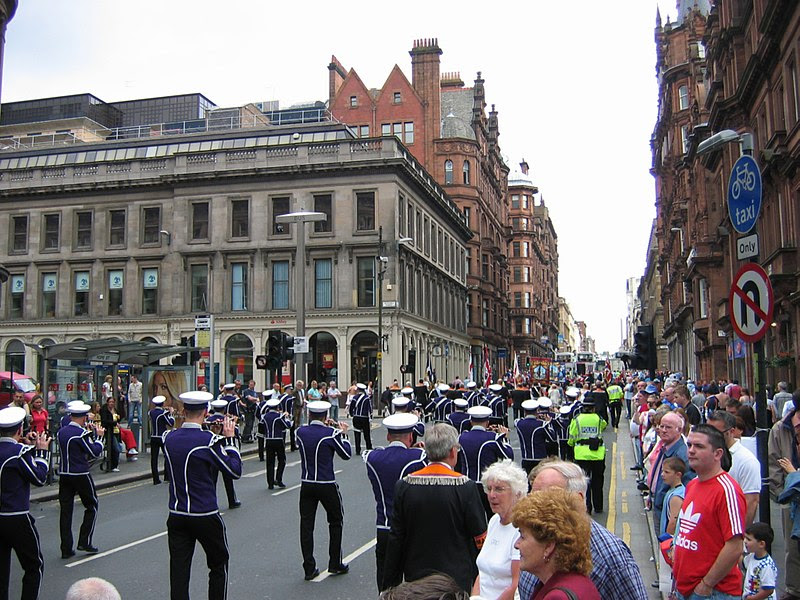 It's not that I'm ignorant, far from it. I have family in Stroke City* who have tattered union flags on their streets, murals to King Billy on end gables and Red, White and Blue kerb stones outside their front door. However, growing up in rather leafy Northern Irish suburbia I have never been affected so much by the protestant marching season as I have since I moved to Scotland.

My first July in Scotland I was in bed in Stoneyburn enjoying a quiet lie in with my partner when the sound of marching bands struck up outside. I'd never lived on a parade route in my life, but Stoneyburn being more or less a one street village I lived on that street and the route went past. That was quite a shock.

A couple of years ago I was heading by bus from Bathgate to Falkirk trying to get to some friends' wedding reception. However, at Shieldhill we got held up for what seemed like an age waiting for a parade to go past. Maybe it's because back home we knew when they were happening as they would have been on the news either because of protests or as a traffic warning, but to suddenly find myself delayed because of a march actually made me a little peeved.

It takes me to three Saturdays ago the 5th July was the big parade in Glasgow (see above) it was also the first weekend of the Glasgow East by election. Me being me I was heading to Glasgow for the politics, not the marching kind, that day. All was well after all the Orange March wasn't going to go through the East End of Glasgow until it came time for me to head home. I'd missed the last direct bus to Bathgate to was going to have to take a Citylink 900 into Edinburgh and out again from there. Of course at the time I was heading back a large number of drunken Orange supporters also wasn't to head back through to Harthill. Now I've drunk in loyalist and republican pubs in various places in Northern Ireland and with the friends I've been with been pointed out which people "not to mess with" shall we say, but getting on that bus with them I was actually a little scared.
You may ask why someone with my background and upbringing would be scared. My accent has had to mellow to be comprehended for starters, but more importantly this hoard were somewhat the worse for drink. If trouble were to start, though it didn't, I don't think they would have taken time to check my family credentials, how many signed the Ulster Covenant, which lodges family members belonged to, or just which protestant estates my kin lived in. The fact was despite all that I wasn't one of them, they didn't know me and therefore knowing that I had no support and helpful friends myself I was more scared than I had even been drinking in the "wrong" parts of Belfast.
*Stroke City is the shorthand North West Radio Ulster DJ Gerry Anderson started to avoid the whole Derry/Londonderry debate once this became a political issue so as not to offend any of his listeners from either side or none of the sectarian divide.
Posted by Stephen Glenn at 10:03 1 comment:

Banking, Pay and the July Holidays

With the exception of Christmas Day and Boxing Day which are universal there are only two concurrent days that affect parts of the UK's population. One is the Scottish Hogmanney 1st and 2nd January, but these are so close to Christmas that to be honest if you're there or not you don't care what effect these have on you as you're probably off too. The other of course as any N.I.P.P.L.E. will tell you is the 12th and 13th of July.

Like the others listed these are movable in the extent that should they fall on a weekend they will be moved to the start of the next week. The above two mean that wherever you are in the UK, or world for that matter, you'll probably not notice much chance though the festivities, but for the Northern Irish holiday you may notice only if your pay goes into your retained Northern Irish account mid-month.

You see back in 1690 by a quirk of fate King William deigned to do battle at the Boyne on the 12th without thought nor hindrance for 21st century banking practices. The fact that banks weren't universal at the time he sought to right Britain of the Stuart dynasty of his wife is no excuse. That he should merit the same length of holiday celebration as our Lord and Saviour's birth is also not really acceptable. William should really have had better foresight and either delayed his muster for 4 days or got there a day earlier.

The net result of the mustering of the first Irish Orangemen was that the celebrations can be shifted to the 14th and 15th of July should the Twelth surreptitiously fall on a Saturday. In the days of ledger book banking this probably would have had negligible effect as you wouldn't expect the money from your pay to be in your account right on the day you received it. But when you get electronic transfer you expect it to be there soon after midnight on the day in question, 15th of every month. Somehow this does not apply to one July ever 6 to 7 years.

If you live in Northern Ireland and get paid mid-month you employer will have probably arranged for you pay date that July, like this to be advanced to the 11th. However, if you are a N.I.P.P.L.E. you employer does not take this into account and, should you end up to the limit you can take out at the end of the previous pay month, you will find yourself for 24 hours unable to take out cash.

Now should you as a customer fail to have funds when a direct debit is scheduled to leave your account the bank will, at present, change you for this misdemeanor. However, if the bank should fail to allow a N.I.P.P.L.E. their money on schedule what can we do? Should we write to them asking for this and charging them £30 for the privilege? After all that is what they would do. Now surely fairness should lead to a quid pro quou. I know that no individual is actually there transferring my pay into my account every month. So how come once every 6/7 years the little elves of Electronic Banking take a 4 day leave or absence and don't let me access my wages until the 16th July.
Posted by Stephen Glenn at 06:03 No comments:

I was first described as a Nipple in my first permanent (well at least open ended temp) job in Edinburgh. I'd had managed up to this point lived, studied and worked for 8 years in London and not come across the term, before a few years back home then moving here to Scotland.

It was possibly even on my first day there that one of my colleagues exclaimed, "Your a Nipple then!". I was still getting used to the accent, similar, yet strange and wasn't quite sure I'd understood right. So asked for repetition. Then still not sure I'd heard right looked blank and got the following explanation:

With the penny finally dropping I nodded my ascent and started my second stint as a Nipple and entered the world of Nippledom. Over the years I have come across some interesting cultural lessons of just what a N.I.P.P.L.E. can encounter, expect and face in their life over the Irish Sea or maybe even further afield.

That is what this blog is going to be about. My insights, humorous anecdotes of fifteen years living away from Northern Ireland in and near two of the other capitals of the UK London and Edinburgh. I hope you enjoy them.
Posted by Stephen Glenn at 07:39 No comments:

Stephen Glenn
Northern Irish guy, who went to University in England and is currently working and living in the Northern Isles.